And all the girlies say, I'm pretty fly for a white guy

Hear thee, Hear thee.
Due to my extreme awesomeness have been awarded the 'Honest Weblog' tag. We all honestly know how superb and peachy keen I am, so let it be no surprise. Seriously, I'm like..tickadeeboo and Jolly hockey sticks, all rolled into one slightly short, un poco sarcastic, and always cynical package. I have been tagged by the teenage prodigy of all things fashionable, adreamer of Aus Style. This young lady can write, draw and dress with the best of them. She's probably a wicked, awesome dancer too...and I wouldn't be surprised if she could do back flips in designer wear.

"This award is bestowed upon a fellow blogger whose blog’s content or design is, in the giver’s opinion, brilliant.“When accepting this auspicious award, you must write a post bragging about it, including the name of the misguided soul who thinks you deserve such acclaim, and link back to the said person so everyone knows she/he is real. Choose a minimum of seven blogs that you find brilliant in content or design. Or improvise by including bloggers who have no idea who you are because you don’t have seven friends. Show the seven random victims’ names and links and leave a harassing comment informing them that they were prized with Honest Weblog. Well, there’s no prize, but they can keep the nifty icon. List at least ten honest things about yourself. Then pass it on!”

1.When I have a cold I sleep with my childhood teddy bear, White Ted.

2.I have studied enough piano, and passed enough exams to be allowed to teach it, but if you put me on the spot the best I could do now is Mary had a little lamb.

4.Sometimes I prefer wearing my glasses over my contacts because I feel like people don’t ‘see’ me. They’re like..my geek shield, or something.

5.When I was thirteen I was so obsessed with Buffy the Vampire Slayer that I’m sure my parents wanted to send me to a therapist.

6.I worked at Starbucks for eight months and it made me slightly crazy and depressed. Beware!

7.Everyone thinks I’m brave for moving to Europe indefinitely, I’m terrified actually, but not for reasons they understand.

9.When my friends found out I was working in childcare they were either completely shocked or laughed hysterically because it is ‘so not you’. But really, I love it.

10. I had my first real kiss a month before I turned 16 because my mum kept annoying me by saying ‘sweet 16 and never been kissed’ so I went out and found me one at an underage disco. It was horrible, and I now avoid all men in red t-shirts. 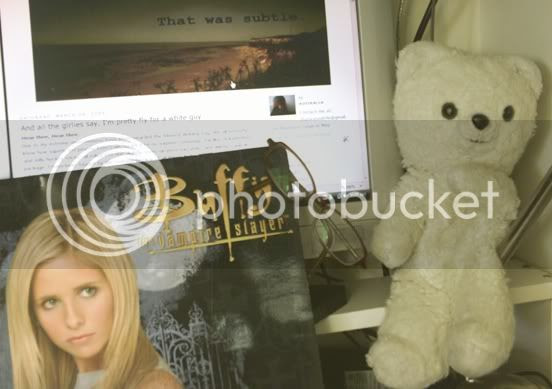 Now, I shall tag: