Flower says I am overdue for a blog post so here we go (a lot of text to follow):

Time has been passing here in Hanoi and sadly I am not growing any fonder of the city. However, I still really enjoy my job despite the chaotic past month of writing exams, giving exams, marking exams, calculating marks, writing reports, attending multiple, torturous, assemblies.

The High School kids here love to perform and every assembly gives two groups of students the chance to strut their stuff in front of the whole school. At first I watched these performances agape, impressed, sometimes a little disturbed by all the teenage hip swinging. Now I sit there glowering, thinking ' so this is what you were doing when you missed three of my lessons last week'. The other teachers and I were told that we weren't allowed to show films in the last week of school (even though all the Vietnamese teachers seemed to be doing just that). So I planned games, fun activities, let's just say things that took a lot more planning than putting on a damn film. What happened? First year 11 lesson of the week four of eighteen students turned up. Next three lessons = nobody. I spent a lot of alone time in my classroom singing along to One Direction.

A couple of weekends ago one of my brightest students and her mother took me out for lunch. Usually I would politely decline any such invitation (clearly it would lead to a world of awkward) but since the student is leaving to study abroad I didn't have a problem with it. It was a really nice day, I'm sure it must have been exhausting for my student as she had to interpret for her mother and me for five hours! I was really proud of her. It was also quite tiring for me, I never realised how difficult it is to be friendly, chatty, casual me with an adult whilst still being in ' appropriate teacher mode' with my student. A lot of my best students aren't returning next school year which really saddens me. I am excited to get new classes in August but I am going to miss my old students, even though I've only taught them for a few months. I hope this connection with my students, and actually caring about them, doesn't fade away as I become an older and more bitter teacher. I can see how it happens.

So, I seem to be talking a lot about school. I guess it's because that's the part of my life I have been focussing all my attention and efforts on lately. I have spent many a late night wondering whether I really want to stay here in Vietnam and the honest answer is that I don't. However, there's the other question of whether I want to stay in my job and the answer is a much stronger yes. Job wins out. I know a lot of people feel they have failed when they move abroad and decide they'd prefer to go home. I guess for me it's different, I don't feel like I chose Vietnam and it's also not an issue of wanting to go home. Sure, I'd rather be in Melbourne but I could also be happy back in Europe. One of my late-night, over-analysing, anxiety-inducing, decision-making sessions led me to decide that I will leave Vietnam earlier than planned but not before I have seen through an entire teaching semester from start to finish. So, the first semester begins in August and ends December/Jan. Closer to Christmas I will reassess but as of this moment my prediction is that I will go to Europe in January and try my luck there once again.

I spend a lot of time thinking about what it is that makes me a bad fit for Hanoi and Hanoi for me. Plenty of people I have met consider Vietnam to be something of a paradise for expats. I'm not completely odd; I recently made some friends who, after six months here, have decided it is not for them and are heading off to Australia. I suppose it really is all a matter of personality and unfortunately mine is at odds with everything around me. So I wrote a list. A list of things that I want from my career/lifestyle. All of the things that will hypothetically offer me contentment. It's list time, bitches.


1. A teaching job in a High School with agreeable colleagues and students who don't like to set things on fire/potential to teach my specialised subject areas.
2. My parents only a few hours travel away/potential to easily reach them if there's an emergency
3. Some disposable income/potential to save money/potential to never borrow from my parents again.
4. Low goddamn humidity/potential for my hair to not look like shit
5. Friends/potential to meet people with similar interests to me
6. Local cafes/pub/somewhere to go and just read a book for a couple of hours
7. Live alone but not in isolation
8. Interesting travel destinations nearby
9. Easily accessible public transport/potential to be independent
10. Some free time but not too much/potential to pursue hobbies/interests/studies.
11. Inspiring scenery/landscapes/buildings/history
12. Potential for romantic interests (What? even if I don't want to chase it, it's nice to know it's there)
13. Easily accessible doctor/healthcare
14. Ability to stay healthy/eat well/exercise without having to join a gym/potential to not feel sick all the time
15. Low pollution/potential to actually see a blue sky during the day and stars at night

So that's my list, I don't think it's exceedingly unreasonable. Hanoi only checks four of these points for me. Obviously everyone has different opinions on what interesting travel destinations are or what kind of scenery is inspiring. For some expats Vietnam is probably the whole shebang. Sadly, I don't think there is anywhere that would check all of these ideals for me at the moment. Melbourne comes close, but the chances of finding a job as good as the one I have now are slim and I'd never be able to afford to live alone. Europe comes even closer, but my parents would be a thousand-dollar and 24-hour flight away. I don't need it all to be happy, though, but I'd like at least twelve. Maybe I can revisit this list twelve months from now and see where I'm at. Maybe then I can whinge some more and continue to piss everyone off. Sorry. Not sorry.

So texty. I really need to start taking more photos when I'm out and about. I do get out and about, you know. I'm just scared that if I take my camera out it will melt within seconds; it's not an irrational fear.

Anyhow. Next weekend I will be leaving Hanoi and heading off to actually explore some of Vietnam. I think I am looking forward to it. My trip involves two eight-hour train journeys, which I am particularly excited about. There will also be ample historical town time and relaxed beach days. Then I'm heading back home to Melbourne for a couple of weeks before I return to Hanoi to teach Summer school. I will be sure to take a lot of photos and write updates on my Vietnam adventures. I really hope to change the whingey tone this blog has taken of late and I feel like this trip is just the ticket.

Hmmm, I feel that after reading all of this you really deserve a photo. However, I've only taken two pictures this month which aren't of my students or the school. They're not very exciting... 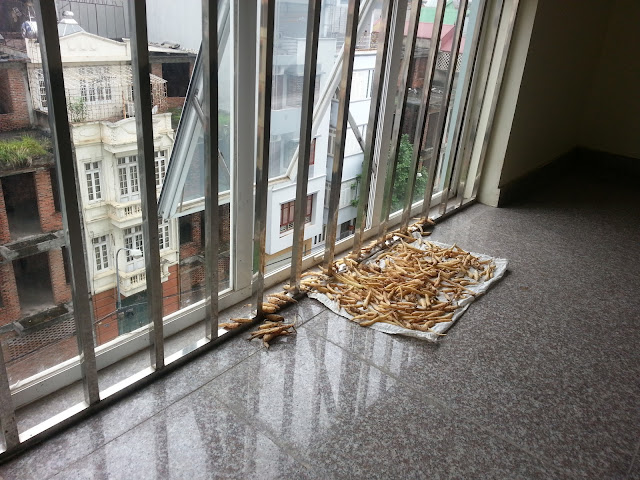 The stairwell in my apartment building. I've seen multiple blankets and towels and even underwear out to dry but never veges. These were there for three days. 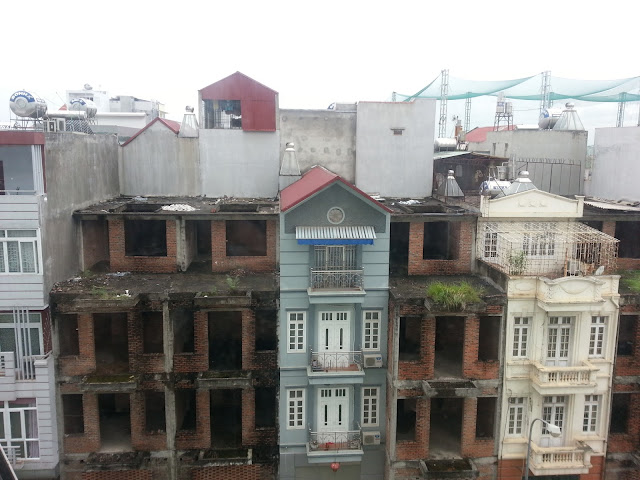 The street next to my apartment building. It doesn't have a name yet nor is it paved. Owners buy the land and build the shell of the building. Then they leave it unfinished indefinitely until they have a pressing reason to finish the construction.